HOME | STYLE | FAQ | CONTENTS | AUTHOR | ABOUT US | LINK | DL | CHANNEL | CONTACT US | SOCIAL SITES
ALL ARTICLES | SOUTH ASIA | WOMEN RELATED | I NTERNET | PHILOSOPHY |
NEWS | JOKES | QUOTES | VIDEOS |
WEB PAGES
OUR OFFERING
UPLOADED ITEMS
QUESTION * Why are there so many articles on different subjects?
OUR EMAIL kri200@womenspowerbook.org
* Why are there so many accounts on Twitter?
QUESTION
Raise the vol to listen to the lady airing awe @ the SINGLE author encyclopedia
World’s encyclopedic knowledge compacted in your hand
SHARE On Facebook On Twitter On Digg On Google +
BLOGS MODERN WORLD HUB WOMENSPOWER HUB WEB PROMOTION HUB SPORTS POWER HUB
Husbands, not strangers or men with guns, are now the biggest threat to women in post- conflict west Africa, according to a report by the International Rescue Committee (IRC) released on Tuesday. The IRC report, Let Me Not Die Before My Time: Domestic Violence in West Africa, based on data collected over 10 years by the IRC in Sierra Leone, Liberia and Ivory Coast, said domestic violence is the "most urgent, pervasive and significant protection issue for women in west Africa".It calls on the international community to recognise domestic violence as a humanitarian issue and to increase funding significantly to address the problem, saying: "If the humanitarian community ignores what has been considered a 'private matter', it will fail to confront one of the most significant public health crises and primary obstacles to women's empowerment in postwar societies." Sierra Leone passed a domestic violence act in 2007, establishing basic rights for women in the home and entitlements forsurvivors such as free medical care. Domestic violence is now punishable by a fine of up to 5m leones (£720) and up to two years in prison. But by the end of 2010, only one person had been prosecuted. Amnesty International's report on Sierra Leone last year said: "Women's lack of access to the police, exorbitant fees charged by medical officers and pressure to make out-of- court settlements all contributed to impunity and state inaction." In Ivory Coast and Liberia, no such laws exist. In Liberia, Africa's first female president, Ellen Johnson Sirleaf, amended the penal code to make rape illegal – previously only gang rape was a crime. In 2008, the government established a special court to try cases of sexual violence. But since it opened in 2009, only 18 cases of rape, resulting in 10 convictions, have been tried there. In a small church on the outskirts of Monrovia, Liberia, an elderly lady from a women's group jumped to her feet. With a smile on her face, she cried out: "Women, O women!" – the start of the chant Liberian women use to unite each other. "Don't just sit down. Do something positive," the group replied with force. They began to talk about domestic violence. "We born seven living children but right now me and my children are looking ugly [living in poverty]," said Ma Annie, who is in her 50s. "He's now running behind a new girlfriend. But when we talk [about it] he can beat me. NEXT 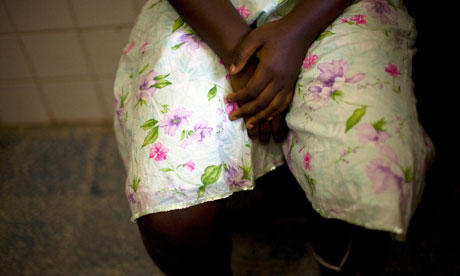