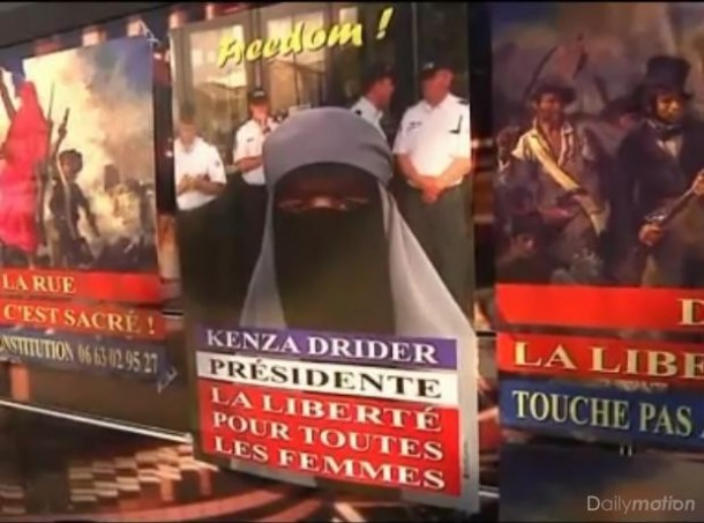 CAIRO - Egyptian Salafi sheikh Abou Islam Abdallah woke up one morning in 2005 with a brilliant idea. It was a dream he'd obsess over for seven years: a television channel run only by women wearing the full-face veil. No hijabs, headscarves or other partial forms of covering: on Ummah TV, a fig leaf wouldn't be enough. Niqabs, gloves, socks. Period. He was tired of the tacky Egyptian television anchors with their sparkly, frilly blouses, blow-dried hair and shimmering lip-gloss. He wanted a simpler, more sober style, for the anchors on Ummah TV: there is black, black and more black. In short, a paradise like no other. Of the dozens of Islamic TV channels already frantically competing to attract religious believers put off by cable broadcasters' wiggling hips, not one had previously dared to think of an idea as thorough and thought-out as this one. Abou Islam Abdallah has obviously had a divine illumination. For years, the only problem was that the niqab was banned from Egyptian TV screens by the Rais himself: Hosni Mubarak. Abou Islam had to put his dreams of glory on the backburner; and while he waited, he launched a more modest Islamic television station, Ummah TV, presented only by men with thick beards. One morning in January 2011, however, came the revolution: a godsend. Suddenly Salafis, previously bullied by the iron fist of the previous regime, could now express their beliefs and their way of dressing; they could even think about creating their own political parties to espouse the practice of Sharia law and create an Islamist state. Abou Islam knew that his time had come, and in the space of a few months, he had recruited 30 presenters, who would only show their eyes. The entire team would be made up exclusively of women: from technicians to presenters, journalists to directors. The result, slated to be broadcast for the first time on July 20, the first day of Ramadan, has surpassed expectations: all male presence will be eliminated. If a woman appears on screen not entirely covered by the veil, her face will be censored and the main aim of the programmers will be to promote the niqab and to respond to the issue of female adultery. "It's a project that combats discrimination," affirms the director, Sheyka Safaa Rifa'i. "Because women who wear the full face veil are being excluded from the media." Better suited for radio? In the Egyptian media, which is currently preparing its Ramadan broadcasting schedule - mainly filled with cheesy soap operas - consternation and disbelief prevail, especially as the news of the project came in the wake of the arrest of the owner of an oriental dance television channel.
You might also like: SAARC Leaders Meet in Delhi: Did Modi And Sharif as Democrats Transcend Borders to Unite Against The Pak Army? Female Taliban Suicide Bomber Hates The Idea Of Is this the world's happiest man? Brain scans