HOME | STYLE | FAQ | CONTENTS | AUTHOR | ABOUT US | LINK | DL | CHANNEL | CONTACT US | SOCIAL SITES
ALL ARTICLES | SOUTH ASIA | WOMEN RELATED | I NTERNET | PHILOSOPHY |
NEWS | JOKES | QUOTES | VIDEOS |
WEB PAGES
OUR OFFERING
UPLOADED ITEMS
QUESTION * Why are there so many articles on different subjects?
OUR EMAIL kri200@womenspowerbook.org
* Why are there so many accounts on Twitter?
QUESTION
Raise the vol to listen to the lady airing awe @ the SINGLE author encyclopedia
World’s encyclopedic knowledge compacted in your hand
SHARE On Facebook On Twitter On Digg On Google +
BLOGS MODERN WORLD HUB WOMENSPOWER HUB WEB PROMOTION HUB SPORTS POWER HUB
Hindu-Americans have the highest socioeconomic levels among all religions in the United States, according to a new study by the Pew Research Center’s Forum on Religion and Public Life. Experts say U.S. immigration policy is the main reason Hindus do so well. Both the 1965 Immigration Act and the more recent H1-B visa program set the table for Hindus to succeed. The former encouraged the immigration of professionals, particularly doctors and engineers, while the latter was designed to encourage the immigration of highly skilled “guest workers.” The number of H1-B visas issued to Indians grew steadily in the late 1990s and early 2000s and then spiked again in 2007. In 2011, according to the study, India accounted for more than half of all the H1-B visas granted. “The education capital of this group is phenomenal,” said Khyati Joshi, an associate professor at the Fairleigh Dickinson School of Education in Teaneck, New Jersey. The Pew study, titled “Asian Americans: A Mosaic of Faiths,” bears that out, and the numbers are staggering. Eighty-five percent of Hindu- Americans are college graduates, and 57 percent have some postgraduate education, which is nearly five times the national average. Education levels largely correlate to income, and there as well, Hindus rank at the top of the list. According to the study, 48 percent of Hindu-American households have an income of $100,000 or more, and 70 percent make at least $75,000. Another, secondary driver for the success of Hindus can be traced back to India’s caste system, according to Prema Kurien, a professor of sociology and the director of the Asian/Asian American Studies Program at Syracuse University in New York. 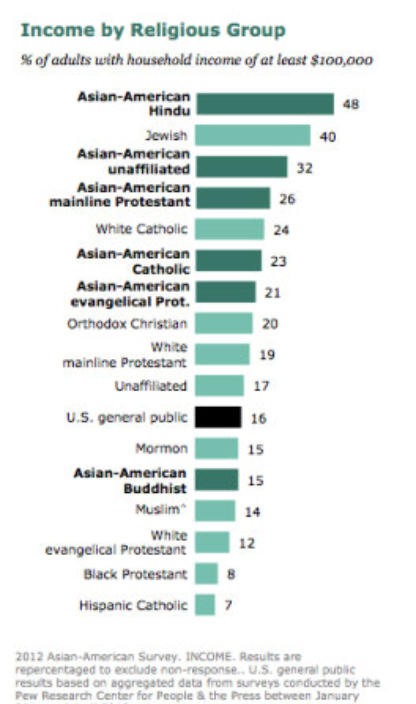 You might also like: South Africa: Where Corruption, Rape and Murder Are Normal The unthinkable is now reality. Only in Africa? - Robert Morley Sexual Revolution Brought STD And Social Change: Is Our World Becoming A Fearful Place? Rape in South Africa