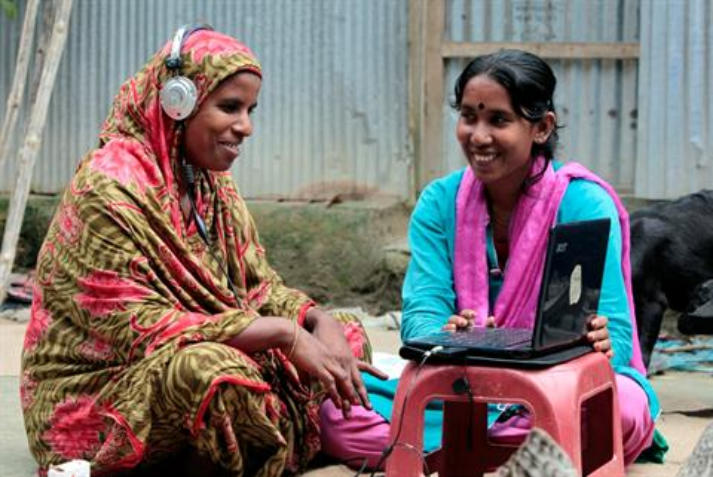 HOME | STYLE | FAQ | CONTENTS | AUTHOR | ABOUT US | LINK | DL | CHANNEL | CONTACT US | SOCIAL SITES
ALL ARTICLES | SOUTH ASIA | WOMEN RELATED | I NTERNET | PHILOSOPHY |
NEWS | JOKES | QUOTES | VIDEOS |
WEB PAGES
OUR OFFERING
UPLOADED ITEMS
QUESTION * Why are there so many articles on different subjects?
OUR EMAIL kri200@womenspowerbook.org
* Why are there so many accounts on Twitter?
QUESTION
Raise the vol to listen to the lady airing awe @ the SINGLE author encyclopedia
World’s encyclopedic knowledge compacted in your hand
SHARE On Facebook On Twitter On Digg On Google +
BLOGS MODERN WORLD HUB WOMENSPOWER HUB WEB PROMOTION HUB SPORTS POWER HUB
JHARABARSHA, Bangladesh: Amina Begum had never seen a computer until a few years ago, but now she's on Skype regularly with her husband. A woman on a bicycle brings the Internet to her. Dozens of "Info Ladies" bike into remote Bangladeshi villages with laptops and Internet connections, helping tens of thousands of people - especially women - get everything from government services to chats with distant loved ones. It's a vital service in a country where only 5 million of 152 million people have Internet access. The Info Ladies project, created in 2008 by local development group D.Net and other community organizations, is modeled after a program that helped make cellphones widespread in Bangladesh. It intends to enlist thousands more workers in the next few years with startup funds from the South Asian country's central bank and expatriates working around the world. D.Net recruits the women and trains them for three months to use a computer, the Internet, a printer and a camera. It arranges bank loans for the women to buy bicycles and equipment. "This way we are providing jobs to jobless women and at the same time empowering villagers with critical information," said Ananya Raihan, D.Net's executive director. The women - usually undergraduates from middle-class rural families - aren't doling out charity. Begum pays 200 takas ($2.40) for an hour of Skype time with her husband, who works in Saudi Arabia. Begum smiles shyly when her husband's cheerful face pops up. With earphones in place, she excitedly tells him she received the money he sent last month. He asks her to buy farm land. Even Begum's elderly mother-in-law now uses Skype to talk with her son. "We prefer using Skype to mobile phones because this way we can see him on the screen," Begum said, beaming happily from her tiny farming village in Gaibandha district, 120 miles (192 kilometers) north of the capital, Dhaka.
You might also like: A German Newspaper Says 'Animal Brothels' Are On The Rise As Bestiality Becomes 'Lifestyle' Choice’ Christian ‘historian’: Allowing women to vote ‘hurts the entire culture and society’ Indian Elections 2014 A Hindu Revolution: Like The Iranians What Made The Hindus Seek a Revolution?